I skipped reading the main page of the newspaper. Since Mangalyan’s success two days back, the only news the newspaper carried was about it and I was seriously fed up. As I turned the page a picture caught my eye and I turned it back again.

And then it stuck me. This must be Kamakshi herself!!

And my classmates were kind too. Most of them were day scholars. While one brought some books to read, another brought me home food and so on. While we were busy having a good time, there was Kamakshi. It was obvious that she came from a lower middle class family as she had just two sets of clothes which she wore alternatively. Her hair used to be oiled every day and plaited very neatly into two. She always brought her tiffin and whats more always got something for me because I didn’t get to eat home food. The food was a simple citranna(lemon rice) or uppit(upma) but always very delicious. 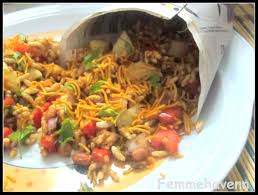 And while we would scamper away to have a churmuri(bhelpuri), she rarely did. Obviously the seven rupees a plate was expensive for her. It seemed her father who was a clerk in one of the offices was the sole breadwinner for a family of ten. So it was but natural that the seven odd rupees were a princely sum to her. Sometimes I would force her to come and have some churmuri with us. At that time she would just have soutekayi churmuri which was about five rupees. I suppose it was a bit easy for her to swallow her pride for five rupees than the normal seven rupees churmuri.

I had been to her place a couple of times. Once was during navratri and another just like that. They treated me with so much love that it brought tears to my eyes and reminded me of home.

But after that Kamakshi became distant. Reason being that she started giving tuitions. Her younger brother was a slow learner and needed some extra coaching and it was either his education or hers which could be financed by her father. Kamakshi decided to finance her own education.

One day when she was looking very weak and it seemed she would just fall, I forced her to have some churmuri with me.

‘Hey Kami’, Meena said, ‘When will you treat us, it is always us who treat you’. Meena was the one who always came second while Kamakshi was always first. Meena was obviously hurting at the fact that in the recent test, again it was Kamakshi who had come first.

Kamaskshi’s pride was hurt. While the tears hurt her, she quietly ate the soutekayi churmuri pushing it down with large gulps of water. I pounced on Meena as soon as Kamaskshi left. ‘Didn’t I say the truth, she is a free loader, isn’t she?’, said Meena

After that she became more distant. I would see her walking to college and back. Why she didn’t come by bus, I could very well understand. Maybe she had lost some of her tuitions and so was walking to and fro to save money.

After about three months she stayed back after college, came towards us and said shyly, ‘today is my birthday’

As we gathered to sing and embrace her, she announced, I want to treat you today with some churmuri, And while we protested, she took the ten of us to have some.

That day the shurmuri was extra special for it had the taste of her sacrifice.

I picked up the phone and called Datta Uncle. Datta Uncle had been my father’s PA and now was my PA too.  ‘Uncle just find out from the picture in the front page of today’s newspaper, if the lady in pink saree is Kamakshi. If yes, find out her phone number and address’.

I got the reply in the affirmative some two hours later.

I picked up my mobile and dialled her number. ‘Care for some churmuri’, I asked.

Life takes us on myriad paths and when we come to the original path taken, we seem to be lost.

Same happens when you meet someone after a long time and you are shocked to see how life has treated them.

We were in Mysore for a day. Hubby had some work and we tagged along. Morning was spent at the zoo. The kid enjoyed even though he had to walk about 3 km, And we had a nice time with him, explaining everything and answering billions of questions.

But it was evening that I was waiting for. I had done my B.Com in Mysore. We were to meet my Uncle and Aunty. Uncle had been my father’s colleague in Bhilai. A relationship which began there had matured to them being my Local Guardian.

Those three years will always be cherished. It was that time when I finally started understanding life. Aunty who helped me transform. Uncle who guided me and in true sense they two are the ones who laid the foundation of my spiritual growth.

Even today I can smell the badam milk which she used to give me early in the morning while MS’s Suprabhatam played in the background.

Sickness, moroseness, celebrations all had one destination-VINUTHA. (the name of their house)

Sonny wanted to see the ‘bus’ of Mysore and so we boarded a bus to their place. Got down at the supposed stop. Only to realise that the whole area had completely changed in the past 17 years.

And they too are living in a different house now as their house is being renovated.

What followed for the next half an hour was chaos. The better half being the better one geographically got angry that I could not locate a place which I had frequented so much. The anger was more because the son had had to walk some more.

He wanted to return to the hotel room. I refused to comply. Nowhere was I going without meeting my mentors.

Then finally Aunty asked us to wait where we were. She came in an auto. I got in and she hugged me then and there. The wise one’s anger melted away. The younger one was shocked to see someone other showing so much love to his mother.

We went home. It smelled the same of badam milk and agarbathi, of love and familiarity.

But what I was not prepared to was the vagaries of age.

In our databases we nourish the same old image of years gone by without realizing that age might have caught on.

We caught up on memories, The other two ‘s eyes bulged out more and more. They had not prepared themselves for the love and memories that we exchanged.

And all the while I burnt inside

How could time tarnish my happy memories. Why aunty had to shuffle, why Uncle had to tremble?

But still there was a feast to gorge upon. We were touched. In spite of physical limitations Aunty had taken so much care to see that we were fell fed. And everything prepared by herself. In an age where we pick up our mobiles to order food for self or guests. Here was a woman in her late 60s who made everything herself for a friend’s daughter.

We got up to leave she hugged me again. I choked up. Will I be able to meet them again? How much more would Time have hurt them?

We came away wiser. Their love flowing through us which in turn strengthened our bond.

And while I say a prayer for them everyday, I say a request too now, please keep them in your loving embrace always.

On Saturday I was putting my clothes to dry on the terrace. It was a breezy day; the sun was playing hide and seek amidst the clouds,a helicopter was flying above; I was hanging a cloth when  my right foot stuck an elevation in front of me and I fell. And then I sat and cried. I was hurt but more than the hurt I cried for a life which though is independent; will never be normal again. I will always have to walk with my head bowed down, I will always have to read with the paper held near, I will always have problem distinguishing faces. And although I should have got adjusted to my status by now; it still hurts. I am never allowed to forget that now I come in the class of visually impaired.

We live in constant fear too. Every now and then I check my sight. I peep through the peephole to check whether I can see. I try to read billboards far away. Sometimes I wonder what we are afraid of really? The fact that my tumor may recur, the fact that I may go completely blind or the fact that every visit to the OT makes our pocket a lot lighter.

In our school days we see so many dreams, plan so much – want to do this; want to do that. But as we grow all those dreams and plans are forgotten. In the rush to build careers and homes, all the tiny things that give us immense pleasure are forgotten.

I feel as soon as we come in the bracket of 35+, we should start catching up on those dreams. By that age most  of us have achieved something in our careers and at home too. Do something which gives you pleasure, do something which you always wanted to do.  Plan your retirement too.

When I was in Mysore for my graduation I used to help out two blind students who were doing their B.A. It was nothing much; sometimes help them cross the road, dictate notes etc. And I had dreamt that one day I will do something for the visually challenged people. I believe that what I am going through today is God’s way to show me what the blind need. And I believe someday I will be able to do something for people like me.

I plan too; not only for my retirement days but also for a life beyond that. But that will be a post for another day and another site.

Never forget what you used to dream about.