We watched in silence as Aaji yelled at the farm hands. No she was not dictatorial, she was quite generous actually. Looking after the needs of the workers, seeing that they were not too tired was her work for the day but the one thing she did not like was slackness at work. If she saw some workers gossiping or idling around, that would be it and her sermonizing could be heard from miles afar.

After a while she shuffled to her room. Kartik nudged me and said, ‘I bet she is going to open her treasure chest’.

‘What is there to bet about?’, I asked him back, ‘Everyone knows that.’

Aaji had a treasure chest, a medium-sized one. One which she did not open much but on those occasions when she was upset, very jubilant or very sad. And only she had its key.

Whenever me and Kartik came down to Aaji’s place on vacation, the chest beckoned and we would try our best to open it. We were inspired by films no doubt and had tried to open it with hairpins and screwdrivers but sadly the lock was a very old one and obviously not inspired by films.

And so we watched Aaji shuffle and tiptoed behind her. She went to her room and then locked the door. And that was it, that day too we were unable to have a look at the box.

One of the things about big, old houses are that, there is enough place to run and hide even if there is pouring cats and dogs outside. On such an idyllic day when we were snacking on some cashews and playing hide and seek that Kartik called me, ‘Keshav come here, jackpot’. I ran, it obviously meant that he had seen something which we should not see. 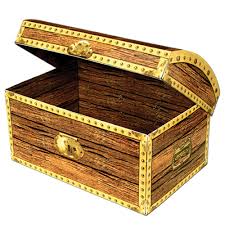 He was in Aaji’s room, there was no lock on her chest. We checked to see if we were alone in the room then slowly lifted the lid. It creaked open. We peered inside and were disappointed. There was nothing much there, a clay pot, some bottles, some book wrapped in a velvet cloth…’Curiosity killed the cat’, said Aaji holding our ears with both her hands. ‘Could not resist, eh? I had just gone to oil this old lock’.

‘But Aaji, what is there to hide, these are just some petty things’, I screamed.

‘Petty, hmmm. Would you like to know why I have kept these petty things’, she said.

‘Yes, yes’, we squealed in joy, who doesn’t like listening to stories and unraveling mysteries.

What is this?’, she asked holding the pot.

‘From where do we get clay?’

We blinked unable to understand where the conversation was heading

‘What is this?’, she asked holding a bottle of perfume

‘And the perfume travels through air, isn’t it?’, we nodded still unsure of what she was saying

She understood our predicament and our impatience and then asked, ‘So did you get a hint’.

We shook our heads.

Which are the five elements, the panch bhootha, the elements which make matter?’, she asked.

Yes we knew about that, we had heard about it in school as well as at home. We started reciting.

‘Earth’, she showed the clay pot.

‘Air’, she showed the perfume bottle.

‘Water’, she showed a bottle of water, maybe it was holding Gangajal. I am not sure.

‘Fire’, she showed a box of match sticks.

‘Ether’, she waved her hands across the sky.

‘But why have you kept all these in your chest. It looked so silly actually, such insignificant things in such a prettily carved wooden chest, ‘And what is there in that velvet cloth?’, we asked.

‘Wait, I have not finished yet’, she said. ‘Earth, air, water, fire, ether are the elements which make the gross body or the body which you see, the physical body. But there is something more which makes us…well us’.

We listened in rapt attention.

“So mind is the first element of the subtle mind’

‘And what helps the mind in evaluating and deciding on the right and wrong?’, she asked.

We were at a loss and so sat in silence.

‘But then there is one element which is a very small word and yet if uncontrolled plays a lot of mischief like you two boys’.

She gave a toothy grin and said, ‘Ego’

‘Ego is something which is necessary and yet if uncontrolled becomes a pain’.

We were utterly lost.

We thought about it a couple of seconds and then nodded a yes.

But whenever you are angry or sad or very happy why do you come and open your chest’, I asked

‘I come and look at all these things and remind myself that I am just an ordinary person. From the elements I have risen and to the elements I will go. So there is no need to be conceited or pompous. I come here to correct myself’, she said.

‘And what is that’, Kartik asked pointing to the velvet cloth.

‘Oh that, that is my daily dose of some reality check’, she said opening the velvet wrap to show a book- the Bhagvad Gita’. It helps me to be in line. Just like in school you are taught to walk in a line, this helps me to be in focus, to be on the right path’, she said.

How could I not attempt a story in a seven-day challenge. I could have just named the story as ‘The elements’ or something like that but then I am taking part in the seven-day Write Tribe festival of words from 1st to 7th September 2013